The Commission on the Status of Women is “instrumental in promoting women’s rights, documenting the reality of women’s lives throughout the world, and shaping global standards on gender equality and the empowerment of women.”1

It is the principal global intergovernmental body exclusively dedicated to the promotion of gender equality and the empowerment of women, and is a functional commission of the Economic and Social Council (ECOSOC) of the United Nations.

ECOSOC was established in 1946, in order to promote, report on and monitor issues relating to the political, economic, civil, social and educational rights of women. Mothers’ Union has consultative status with ECOSOC.

Each year, Mothers’ Union attends the Commission’s annual two-week session in New York, with a delegation of members and staff. We work alongside a range of other NGO’s representing the voice and views of our members and promoting the empowerment and equality of women, and influencing and advising Government delegations from various member states. This is with the intention that each year at UNCSW, member states sign up to a set of agreed conclusions, which they will then implement with their own Governments.

A guiding principle of the Commission is to:

“...raise the status of women, irrespective of nationality, race, language or religion, to equality with men in all fields of human enterprise, and to eliminate all discrimination against women in the provisions of statutory law, in legal maxims or rules, or in interpretation of customary law.”

With consultative status, Mothers' Union has an important role to play in making sure that the voice and needs of our members and women around the world are present in these agreed conclusions, and in holding Governments to account after UNCSW to ensure action is taken to uphold these.

The sixty-third session of the Commission on the Status of Women took place at the United Nations Headquarters in New York from 11 to 22 March 2019.

Read more about their time there in our recent news article from UNCSW 2019 and June Butler’s own official MU blog!

For information on our global grassroots work to help raise the status of women and eliminate discrimination see our projects and our programmes.

Other ways to support 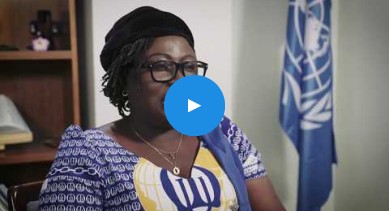 A delegation of Mothers' Union and Anglican Communion members from Sudan, Canada, Democratic Republic of Congo and Ghana speak from the 62nd United Nations Commission on the Status of Women (UNCSW)