Mothers’ Union is a member-led organisation, and all our projects, programmes and campaigns are carried out by our members, acting as volunteers, with a small central staff team providing the necessary co-ordination and professional support.

Leadership structures were updated in the revised constitution in 2018, to reflect best governance practice.

The movement is led by a worldwide board of trustees. The Board meets at least twice a year and comprises the elected roles of Worldwide President as chair of the Board, and up to 12 members who are elected from the different regions of the world, 5 of whom from Britain and Ireland, which is the prime source of funds for the central charity. Elections take place every 3 years, and any individual is eligible to stand for a maximum of 2 terms.

In addition, since 2019 there has been an allowance for up to 4 appointed trustees to provide professional skills to complement those of the elected members.

There are sub-committees in place for Audit and Risk, Remuneration, and to oversee matters in Britain and Ireland.

Where necessary, individuals can be co-opted as non-voting members to either the full Board or a sub-committee.

Where appropriate, the Board also commissions “task and finish groups”, under the leadership of a Board member, to undertake specific tasks. These groups are time-limited and task-specific and may include members and non-members, with the skills required to undertake the specific tasks.

The Worldwide Board of Trustees is accountable to a Worldwide Council. This council comprises the leaders of the Mothers’ Union regions, known as Provinces, from around the world as well as the worldwide Board and former worldwide presidents. The Council meets at least once in each 3-yearly cycle. 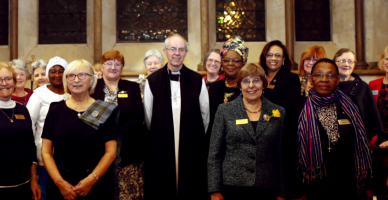 Mothers’ Union is led by a worldwide board of trustees all of whom for 2015-2018  are volunteers elected from the membership.

The work of our 4 million members worldwide who act as volunteers in their communities is supported in the Central Charity by a professional and committed staff team.

The 20:20 strategic vision sets out six strategic approaches that we will undertake to significantly increase our impact on the transformation of families and communities worldwide.