The Being Dad programme aims to build confidence in young offenders as parents, and improve their relationship with their children

Read about our work in Prisons here

Jackie is an MU trained parents’ group facilitator in the Diocese of Birmingham who runs a programme called ‘Being Dad’ in a prison for young offenders in the Lichfield Diocese (with agreement from Lichfield which has many prisons).

She finished her facilitator training in 2007 and has been involved in community parenting and prison work since then. She said about the starting of the programme, “I started doing this work when my sons were about the same age as those in the prison. I was acutely aware that there but for the grace of God go I. Many have had difficult lives and no life chances”. Jackie works with at least one other person to deliver the course. Two new helpers have recently joined her, which she says is wonderful.

Before she started this programme, however, she gained a wealth of experience working in the prison environment on different projects. She volunteered with the Shannon Trust, a charity that helps those in prison to learn to read, and was also involved in MU’s work in the prison creche for many years. Her training as a facilitator coupled with her experience on the ground led her to become comfortable in the prison environment, which isn’t an easy feat. A very important part of this is that the work was supported by the prison chaplaincy and senior staff at the prison. During the course of her work, she came to be in touch with an Anglican Priest who shared with her about a programme that had been set up in Stoke Heath prison. It had been developed by the psychology department there and was an accredited course for the prisoners. The priest, who had been delivering this course in Stoke Heath, came with all the knowledge and experience and wanted to set it up in Lichfield too.

It was this encounter, Jackie said, that triggered her involvement in the programme. She delivered her first course in 2011, learning from the Anglican chaplain and contributing to the discussions. The structure of the course has developed over the last 12 or so years following feedback and fitting in with the prison regime. “Over the years, many people have shown an interest in being a part of the programme, but it’s important that they understand the context. Working in prison is not for everyone. There is always change in regime or staffing and you don’t always know what’s going on”. For her, the ethos of the programme is grounded in the Christian faith and it’s about listening and giving people the opportunity to build their confidence as parents than meeting a set of targets. They are blessed to receive excellent support and encouragement at governor level, which she feels is very important.

The course has been delivered at different times of day and over different lengths of time but currently it is spread over three weeks,  and each session (about 2.5 hours) roughly covers one to two topics. Normally, there are 6-8 participants between the ages of 18-25. The first session is dedicated to talking about the group itself, touching upon issues such as confidentiality and getting to know the participants. It’s helpful if they’re open to sharing about their kids – how many and what ages, so that the facilitators are better placed to ask the right questions.

“We also talk a lot about feelings. These men are generally over 18 and under 25. They may be uncomfortable talking about their feelings. So we try to explain to them that little children, say under two, can’t articulate how they feel in terms of speaking. So it’s all about trying to recognize behaviour. We drill down into that a little bit, and use we pictures and cartoons [for more visual language]”

Jackie shared how they try to focus more on group discussions than giving hand-outs or worksheets as 40% of the prisoners can’t read. They also consider imprisonment and children; how it impacts the whole family, “These are things that they wouldn’t think about normally, because they’re so busy trying to survive in prison”. To encourage them to empathize with their families, they try to get the prisoners to think about the day their family visits them by comparing their schedules of the day versus their families. The difference is stark. While the prisoners only have to do a few things before they come in for the visit, the families generally have to go through a long and complicated process. They travel long distances, often with small kids in tow, to get to the prison, where they are searched and fingerprinted before they can enter. Jackie explains how they try to get them to “see the world from the different perspective” by asking questions they don’t think about such as, “How do you think [your girlfriend] is feeling when she arrives?”.

Lying is another one of the topics they touch upon as most of the prisoners lie to their kids about why they are in prison. “Daddy’s working here for the moment” is a common refrain. They try to get them to think about how they would feel if they were lied to by their friends or family, or how their child would explain their absence at school when they’re not at the parents’ evenings. The goal is to encourage them to be more empathetic and honest.

In the next few sessions, they unpack topics such as communication with their children and families, how to establish a pleasant relationship with their kids, and the most crucial of all - their own childhoods. This can prove to be the most cathartic session, as it not only sheds light on their difficult childhoods but also allows them to finally talk about it in a safe space. “We write the word ‘Dad’ in the middle of a flipchart and they shout out words […] they’ll say things like role model, boss, but also harsh words like abuse, waster, drug addict, alcoholic, beating me up, never there”, says Jackie. She said the facilitators talk about their families too, “They open up if we open up”.

But doesn’t the programme take a toll on the facilitators? It certainly does; Jackie shared how consuming it can be for those three weeks. One can’t do this without a certain degree of resilience, but external support is key in ensuring that their own mental and emotional well being isn’t affected, “I talk to other people in the chaplaincy, and the facilitators talk to each other at the end of each session to know how each one feels”. While she rarely feel threatened in the prison environment, there is still a heightened awareness of where she is. It is mentally, physically and emotionally draining.

The evaluation of the programme is more qualitative in nature; it emerges from conversations and questions. The prisoners are asked how the course is going for them at the end of the sessions verbally, and after the second session, they’re given a small post-it to write what they think of the course so far. They’re also given some tasks for the week such as thinking about one positive thing that’s happened to them and sharing it in the next session. Finally, they’re asked some more in-depth questions at the end of the course to better understand their overall experience and if they’re taking away anything positive. Faciltators help those who find writing difficult.  All these put together give Jackie an understanding of where the programme is headed and if it’s having any impact. So far, she said, it’s been mostly positive. As these men have had difficult, often traumatic, lives, and have little experience of receiving any love, having children offers them an opportunity to change and live better, more fulfilling lives.

Some of the feedback she’s received is:

And finally, “I feel like since I’ve been on this course, I’m developing to become the father my kids deserve” 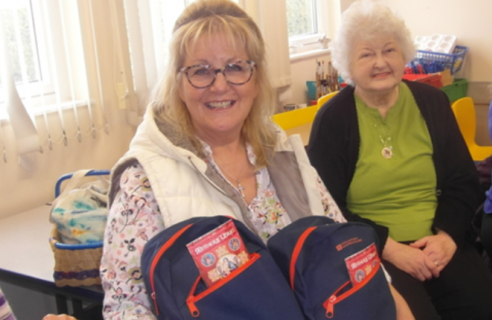 In many parts of the world, Mothers' Union members are active in supporting people in prison and families whose lives are impacted by imprisonment

Away from it all